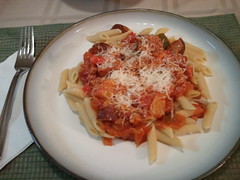 So Thursday night, I decided I wanted to do something different with sausage. Earlier in the week, I’d taken a kielbasa out of the freezer to thaw in the fridge, forgetting that we had other meals planned for the next few nights already. So, it sat in the fridge for a few days, and I was rather reluctant to refreeze it. I didn’t want to cook it in a pan of water, though that usually turns out well. It’s too cold to grill, and we’re rather low on propane anyway, so that was a moot point. So… what to make that would fit in with my new drive to stop always cooking the same dishes every week? What would be spectacular and different? Sausage & peppers, of course, served over pasta.

For whatever reason, I usually try to make at least one pasta dish a week, probably because, well, they’re yummy. But it’s usually the same old thing, just some meat sauce over whatever pasta we have available. This time, I wanted to break from that tradition a bit, yet still have something that would be hearty & filling, and generate enough leftovers for lunches the next day. I sort of got the idea a day or two earlier to do sausage and peppers, but it wasn’t until I started wandering around the grocery store Thursday after work that everything really gelled in my mind.

The produce department had absolutely gorgeous bell peppers… green, yellow, red, and orange. I knew I had plenty of onions at home (even though my wife isn’t fond of them, I’ve decided that if I’m cooking, I’m going to use them when appropriate, and cooked onions don’t seem to bother her too much). So, a green, red, and yellow bell pepper later, a box of penne rigate, and a jar of prepared pasta sauce (I like to cook, usually from scratch, but this is a Thursday, we work all week, and I’ll accept shortcuts when I can!) later, and I got to work.

I first seeded & roughly chopped the peppers, then chopped a few small onions. Once all the veggies were dealt with, I then sliced the kielbasa into discs, and then each disc in half to make half-moons. A bit of olive oil in a skillet later, the kielbasa’s nicely carmelized. Add the onions, sautee for a bit… Add the peppers and realize that I have too small a skillet. Luckily, we have a very large one, which I transferred everything to in order to continue. Sautee a bit longer to soften the peppers, add the sauce. Simmer that while I bring the water up to a boil for the pasta & cook it according to package directions. Then just plate everything up, sprinkle on some freshly grated cheese, and there’s a wonderfully delicious dinner, and 3 small tubs of leftovers for lunches!

For those curious, the recipe I improvised is as follows:

Honestly, I think I could have both sliced the sausage a little more thinly, and used more, too. The next time I make this, I’ll probably up the sausage to 2 pounds, and use a mix of both spicy & sweet Italian sausage, though the kielbasa worked surprisingly well in this application. I might add a can of diced tomatoes and a can of tomato paste, too, just to bulk up the sauce a tiny bit, but the above recipe is certainly delicious and didn’t really seem to be lacking.

Like most of my recipes, I’ll probably tweak it a bit as I continue making it. Nothing I cook is set in stone, since I love tinkering to see if I can get anything better than I have in the past. Feel free to use this as a base, and adapt it to your own tastes and desires, as always.

Oh, yeah, the photo on this post is the actual final result, before I dug in…