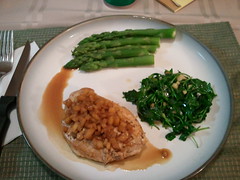 This is the dinner I’d planned to make on Friday night, but was just too tired to attempt after a longish week with nights of poor sleep. It started life last weekend with the kernel of an idea that was simply “pork medallions”. I left it alone for a few days, trying to think of what that would mean, how I’d prepare them, what to serve with them. Would I try to find a small pork tenderloin and try to do the piggy equivalent of filet mignon? That was tempting, I’ll admit. But soon I started thinking “orange juice reduction”, too. And that didn’t really seem to mesh well with the whole porky filet idea.

I’d mentioned some of my idea to Cathy, who seemed to think apple would go better with pork than orange, which made some degree of sense. After all, apple sauce is served with a lot of pork dishes, and you never see an orange stuffed in a roasted pig’s mouth. So, when I went to the store, I was still convinced I wanted to do something with citrus, but I figured I’d work an apple into too, as an insurance policy. And I knew I wanted something tart, so I had it in my mind to get a Granny Smith apple that I could either slice or chop to incorporate into the dish.

I’d actually gone to the store Friday night without much of a plan (this is how I usually shop when tired or letting my creative juices flow). I wandered all over the place, taking my time in produce to see what looked good, but didn’t pick up anything on that first pass. The cheese section, deli, seafood, butcher, meat refrigerators, dairy… I wandered through them all slowly, just looking everything over. When I finished in dairy, I turned around, and started retracing my steps. In the meat department, the pork chops caught my eye while I was looking at the pig hocks (I was wondering how I’d cook something like that, or if I could get away serving it). Gorgeous, lean, and not too big or too many. Score!

Once I had my protein, I pretty much made a bee-line back to produce gather up everything else I’d need, as the entire recipe suddenly coalesced in my mind. The asparagus looked really great, and I knew that steaming it would be incredibly simple and fast in the microwave. I selected a navel orange almost as random, since it was going to be squashed anyway, and i could zest around any blemishes.1 Then over to the apples. There were so many varieties, bless modern next-day shipping! Once a Granny Smith was grabbed, I thought I was done, so headed to the checkout. As I passed a refrigerated end-cap at the exit to produce, for some reason “Baby Arugula” caught my eye, yanked me around, and insisted that I get it, too. Based on the title of this post, you already know that I gave in, just so I could get my eye back…

Preparation was, all in all, fairly easy. I think the longest part of the prep work was peeling, coring, then dicing the apple into 1/8″ to 1/4″ cubes. Next time, I’ll probably use my mandoline slicer with the french fry cutter to do most of the work, faster. Using a Microplane grater, I zested the entire orange, then used a citrus press to juice it and another orange we had. A hand juicer would work just as well, if you don’t have a press. A seriously-long flirtation with lime-based drinks made the juicer a necessity at one point for me, so that’s what I use…

Cathy prepared the asparagus for steaming, washing it, then using the “bend the stalk” trick to break off the woodier bottom section of each stalk, placing it all in a microwave-safe dish. A little additional water above what clung to the stalks, and covering the dish with plastic wrap while leaving a corner uncovered completed the asparagus preparation.

The pork was just lightly seasoned with a bit of salt and pepper while a couple tablespoons of olive oil heated in a medium-high skillet. Once the oil was hot, I put the seasoned side down in the oil, and proceeded to season the other side. I’ll admit right now, I slightly over-cooked the pork. I was futzing with my phone trying to get pictures, and lost track of time, so the first side cooked a few minutes longer than it should have. Don’t do this. It wasn’t ruined, but the end result was a little more well-done than I’d have liked… Anyway, after the first side was nicely browned, I flipped the chops and cooked for a few more minutes on the other side until it had a nice bit of browning on it, too.

At this point, I removed the chops to a plate, and tossed in about half the diced apple. A little bit of sauteeing to soften the apple a bit, and then I added the OJ, zest, and a splash of balsamic vinegar to the skillet. I turned down the heat a little, and basically just stirred and let it all bubble to reduce by about half. I then returned the pork chops and the juices from the plate to the skillet, and let everything cook a little while longer, flipping the pork chops about a minute or so in, then scooping some of the apples on top of them.

After plating the pork chops and pouring on most of the apples & citrus reduction, I lowered the heat to about medium-low and dumped in the arugula and remaining apple. A sprinkle of extra virgin olive oil followed. I just kept turning the arugula over and over in the hot skillet until it was about 1/3 the original volume, and a vibrant green. Then, I plated that next to the pork chops on each plate, added the asparagus that had steamed for about 4 minutes on high in the microwave, and the result is what you see at the top of this post.

And now, the recipe:

The bitterness of the arugula seems to be tempered by the wilting process, the still-crisp diced apple, and the little bit of the citrus reduction it picks up from the skillet as you’re wilting it. The asparagus just needs a little salt and pepper, if you like, and maybe a little lemon. I’ll have to try that some time, myself… I’ve never added lemon to mine. Hmmm, maybe some lemon slices laid on top of the asparagus while steaming? The pork… oh, the pork. The citrus, balsamic, and apples just really make it. I hadn’t quite thought it through, but the apples soaked up so much of the flavor, be sure to have some with every bite of the meat!

What I’d probably do differently next time is be more careful to not overcook the pork. I really should use a dedicated camera instead of my phone, which has proven itself prone to locking up time and again. The lemon with the asparagus is something else I’ll need to try. And, don’t be afraid to use more balsamic vinegar. I literally just did a “splash” from the bottle. Next time, I’ll do at least two splashes, to get more of that flavor into the dish. As always, enjoy, and if you have any variations or additions, please let me know.