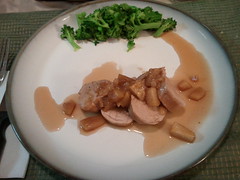 Wow! Another pork recipe! I’ve got to admit, I have a soft spot in my heart for pork tenderloin. It’s significantly more affordable than beef tenderloin, but can pretty much be prepared the same way, in my experience. This isn’t one of those ways, though I may attempt a similar treatment of beef tenderloin at some point… The inspiration for this was “pork tenderloin, apple jelly”, and I let that simmer in the back of my mind for a day or two. After such a short time thinking about it (it’s supposed to be a weeknight meal, after all), I pretty much came up with a decent recipe, I hope…

I decided that, in addition to the tenderloin and apple jelly, I needed some additional ingredients. Maybe it’s all the years of watching cooking shows (I think I’m up to about 25 years, meaning I’ve been watching since before puberty), but I knew I needed some acid to add to the dish. I already knew I needed some chopped apples, and since the best way to keep apples from browning is to add lemon juice, I figured playing that up would be a good idea. I also know I needed some apple juice, though I could have easily gotten away with one of those juice boxes, instead of the 1/2 gallon of juice I ended up getting tonight. Mixing a jar of apple jelly, a few ounces of lemon juice, and an ounce or so of apple juice, I knew I needed to kick things up a bit. Enter an ounce of balsamic vinegar!

I ended up chopping a Granny Smith apple into fairly large pieces. I added a small/med yellow onion, just because I like the flavor of them sauteed a bit. Since I was doing all the prep work well before I planned to cook, I drizzled a bit of lemon juice on the mixture to keep the apple from browning. I then juiced the lemon, adding some apple juice and balsamic vinegar. I also added an entire jar (12 oz) of apple jelly to the juices, and whisked the mixture until the jelly had pretty much broken up. In the future, I’ll probably add it all to a pot over heat in order to both reduce the sauce a bit more, and melt the jelly to make it easier to integrate.

After browning a pork tenderloin (2 to a package, so you get to make this again if you freeze the remainder!) in a pan with some olive oil, I sauteed the apples and onion in the same pan after transferring the pork loin to a glass casserole dish. The scent was unbelievable! Just sautee until the onions start turning translucent, and there’s a bit of carmelization of the apple. Heavenly! When the onions are done, and the apple is nicely browned by cooking (instead of oxidation), dump it on the pork, then pour over your sauce/glaze. Roast for a while in an oven until the pork’s cooked, and you have an entree. The broccoli was just cut into bite-sized florets, then steamed in the microwave for a few minutes, which I did while the pork was resting…

The things I might change? Well, I totally forgot to season the pork with salt and pepper before browning. It didn’t suffer, surprisingly. I’d also probably try to reduce the sauce a bit, so it was thicker and coated the outside of the pork a bit more. Otherwise, the apple was tender, the pork juicy, and all in all, a total keeper in both our opinions!